Tip of the day: crossing busy streets with kids

Crossing a busy arterial with two young riders is sure to rattle any normally calm, cool and collected parent. Many parents simply won’t do it: “Too many busy roads to cross where I live” is one of the most common reasons I hear from parents for why they don’t get around town on bikes with kids.

How do you get everyone across safely and keep what’s left of your sanity? Like everything else in life, it takes lots of practice. And you have to cross many intersections with kids before it becomes second nature.

We cross several of these intersections on a daily basis and have come up with a system that works for all of us and allows for safe crossing. END_OF_DOCUMENT_TOKEN_TO_BE_REPLACED

Val thinks you really need to see this

Val, our cargo bike mentor, sent us this video yesterday saying it was the best safety video ever. The black light hot pants are a little much for our taste, but they get the point across.

The song just might be stuck in your head all day after watching it – thanks Val!

Let’s Get Visible video from VACC, Momentum Magazine and B:C:Clettes via Val.

Life Lessons from a Preschooler

The four-year-old and I journeyed over the University Bridge to pick up some ski helmets we scored on Craigslist. We pulled into the Red Robin parking lot a few minutes early and waited for our helmet connection to show. While we were waiting, the little guy noticed the Bryce Lewis ghost bike memorial on the corner of Fuhrman and Eastlake. END_OF_DOCUMENT_TOKEN_TO_BE_REPLACED

Awareness Test (yes, you should do it) Video

There’s no good way to tell you to take this test without giving it away, but trust me. You should follow this link and take the test. And tell your bio-diesel Suburban-driving neighbors to give it a whirl, too.

By the way, it’s OK to skip the intro, but unlike my spoilsport wife, you should really try to count. Thanks to my pal Kathleen for the link.

16-year-olds Not Rushing to the DMV

Apparently driving is too dangerous and expensive for 16-year-olds to get their licenses as soon as they are eligible these days. State laws restricting driving, rising insurance costs, expensive driving schools, and safety are all reasons teens are waiting to drive according to the New York Times article run in the Business section last week.

END_OF_DOCUMENT_TOKEN_TO_BE_REPLACED

I meant to post this before the Portland bike show but ran out of time. I was just going to let it go, but then I came _this_ close_ to crashing on the South Lake Union Trolley (SLUT) tracks on my way home tonight. So… 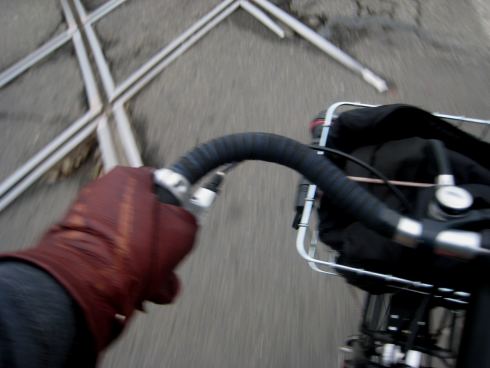 The Seattle Times is on a roll with cycling-as-transportation articles these days. I normally prefer the PI (mostly because the Times-owning Blethens are idiots obsessed with the estate tax), but these cycling articles in the Seattle Times are nice because they lack the PIs pathetic “Sound Off” public forums—normally a magnet for bike haters.

The article “New streetcar lines should be in center of road, council member says” reports that Jan Drago (and other council members) calling for bike-friendly future trolley development. Overall, good points were made. I must cross SLUT (south lake union trolley) tracks about four times on each way of my commute. It’s horrible. So far I’ve experienced no mishaps (knock on wood) but I have come close. Though the Xtracycles’ long wheelbase has saved my ass so far, I know it’s only a matter of time.

It’s quite obvious to anyone who has attempted to ride in SLU, that the city erred on the side of development (sidewalk boarding, even in the face of known bicycle hazards, was called for by Mr. Allen’s team and other property owners and approved by Mayor Nichols). As a result, bike advocates and now the council think the pendulum should swing the other way on future trolley development.

That’s a good start but it brings me to my beef with our beefy mayor. The article resurfaces a comment made by the Mayor in December where he said bike-trolley safety issues weren’t important. To me, this is the real story and calls into doubt the weight of this weighty mayors commitment to the Bike Master Plan. 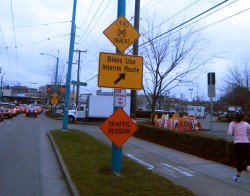 In case you haven’t been paying attention, Mayor Nichols has, shall we say, “put on a few pounds” while in office. As someone who is always fighting against weight-gain, I normally wouldn’t say a word about this. However, in this case I think his growing chin count illustrates how the mayor isn’t qualified to speak on the cycling-safety issue. Those puffy cheeks and straining Dockers make it painfully obvious the mayor hasn’t been piloting a bike around the Seattle traffic infrastructure on a regular basis.

So Mr. Mayor, please do me a favor — when you feel the need to talk about how something is not a cycling safety issue just SHUT THE HELL UP.

You have at least one expert on staff. Let them fill you in on the safety angle. If you can’t trust your staff, consider these other options:

Please, Mr. Mayor, just do whatever it takes to keep your feet out of your mouth. Because until you make an effort to ride your talk and actually try cycling our pathetic infrastructure again, your opinion on cycling safety is worthless. 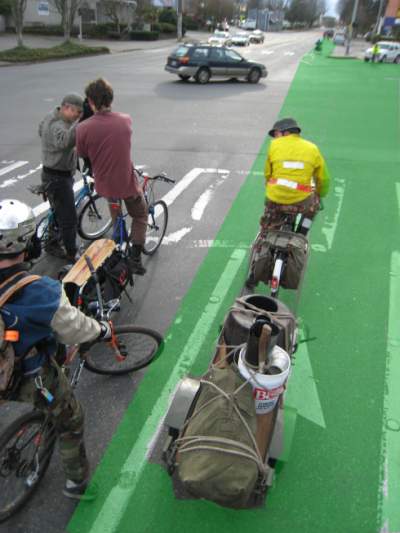 The Seattle Times this morning published an article on Seattle’s effort to increase cycling safety by installing green lanes — we’re the Emerald City, get it –on four dangerous intersections: Dexter at Denny Way, both ends of the Fremont Bridge, and North 145th where the new Shoreline Interurban Trail meets the city limits.

The article goes on at surprising length about the dangers of the “right hook” accident, about Mayor Nichols’ plan to triple cycling trips, and of course, about how we’re keeping up with Portland on the bike safety front (we’re not) by painting these lines. END_OF_DOCUMENT_TOKEN_TO_BE_REPLACED