There’s a giant grey (editor: almost black, really) elephant parked in my driveway, and it’s time to talk about it. Just over two years ago, after six years in various states of carfreeandcarliteness, we ripped off our metaphoric hairshirts (editor: and said “fuck it”) and bought a very used car.  I’m (still) thrilled with our decision.

But I also understand such a disclosure could be confusing to some readers. I can hear longtime reader, ol’ Elmer in Iowa, right now (editor: we made him up):

Wait, wait… back up. I’m confused, if you have a car, why is your blog titled Car FREE Days?

Yes, this blog is titled Car Free DAYS, with the emphasis (originally, now, and always) on the DAYS part. That’s how it was from the beginning (editor: check that link. Those are some young, good looking cats!), and though we went pretty heavy into the car-free part for a while, the DAYS emphasis was always our intention.

Alrighty. I hope you’ve already had coffee. You might need it to get through this (editor: long, but very enjoyable) post.

Two years ago  a very used, very depreciated, but in good-enough-condition-for-us car entered our family. If you’re snickering or thinking about offering advice and/or wisdom or mansplaining (editor: you’re dropping mansplaining on our dear readers? That’s ballsy!) the many reasons we failed and made the wrong choice, skip it. We’ve been through all the stages of car non-ownership grief. And we’re fine with it.

I know I can rent a car when I need to get out of town. I know I can take public transportation. I know I can walk and ride my bike. I’ve done all of these things hundreds of times. (editor: We’re experts at this shit!) For the past eight years, I’ve sampled most of the available alternative transportation choices with my kids: From Flexcar (remember them?), to Zipcar to Car2go, to buses, to most of the car rental companies, to Bolt Buses to Amtrak….trust me, we tried them all. The reality is, while many of these options are simple and beautiful and cheap and carefree for one (or maybe two people), add three more and the beautifulness (editor: and the cost effectiveness) diminishes (editor: greatly). When we finally admitted that full-on, zealot-level, whole-family carfreeness involved less joy, and created more chore (editor: cue weekly parental Rochambeau for who’s going to take back the Zipcar then Brompton home after 160 miles of driving, a long day of skiing, and did I mention it’s 39F and raining?), and more money, Tim and I began to talk car buying.

A note about costs. This is America, driving is (too) cheap! (editor: unfortunately)

I’ll let you in on a secret from our family accountant (me): buying a car has actually saved us money. Yes, it’s true. We’re saving money with a personal car. Au contraire to popular pro-bike claims, it’s actually quite expensive for a Seattle family of four to be car-free, unless they bike and walk exclusively (editor: or never leave their five mile zone.). It turns out the stats and calculations about the cost of car ownership, that so many bike advocates (Editor: and yes, we’ve been those people) love to quote, include the cost of new cars. If you buy an already depreciated used car, with cash, you can cut those costs by 60% or more.

Shocking truth: our seven-passenger-European-built, four-wheel-drive station wagon cost less out the door than a electric Edgerunner set up to carry a family. So yeah, it may not be electric, but it’s still affordable to own, run and insure (editor: yes, insurance was necessary even when we were car-free. More on this later but I’ll give you a pro-tip: If you own a house and use car share, you’d better well have your own liability insurance because the car sharing companies are not  in the business of protecting your assets). I’d even venture to guess that most of these cost-saving stats are based on a one-to-one relationship: one car, one person. Shift into one-to-many territory, and the numbers start to get fuzzy, especially when you consider transit costs. Because, let’s be real, unless you are not venturing out of your 3-4-5 mile neighborhood zone, you can’t really bike everywhere with kids in Seattle. Which means, sometimes you have to take a bus (editor: or drive. Oh wait, that’s the point you’re slowly getting around to making).

Let’s check out an analysis of bus vs. car for a family of four:

Four non-peak, round-trip bus fares (two adult, two youth) cost $16 on King County Metro. At $2.69 a gallon and $2 an hour for on-street parking, that same non-peak trip in a car, including parking costs is half that. Yes, there’s the purchase of the car, but again, buying a used, reliable, depreciated car cost us about the same as one point five winter Zipcar bills (editor: so if you don’t ski in the winter and backpack in the summer you can stop reading now. Congratulations.) Then after that initial hit, we spend less per year on the car than we did on transit and car-sharing combined for just 3 months. Sure, if you exclusively (editor: but those people aren’t reading any more) bike or walk, my point is moot, as those modes really are close to free. (editor: but try to get your middle schooler to ride to his cross country meet in Federal Way, in the rain. Or try to get your bike-hating high-schooler to ride, well, anywhere. If you’re going to take a hardline on the biking and walking thing with teens, then prepare to spend a lot of time at home staring out the window.)

Another Argument: But hey, it’s not just about money. What about joy of biking and walking with kids

I’ve written about this before. Yes, there is joy. So much joy! (especially when the kids were young). Joy easily and always outweighs cost for me. Joy is priceless. We went everywhere on bikes. (editor: we rode to freakin’ Mexico! How’s that for cred?). It was easy to bike with kids-as-passengers in the city. Throw them on the back of an Xtracycle, bundle them up, give them a snack and a book and they were happy. I’m comfortable enough with my in-city traffic riding skills that trip distance was never really a problem for me. West Seattle and back? No prob. Vashon Island? Sure.

But once the kids graduated beyond the Xtracycle – and even the tandem – to riding their own bikes, that carefree ease evaporated into the misty grey Seattle November skunge.

I know you blissful Seattle family bikers with young kids probably don’t want to hear this. And some of you are probably snickering and thinking I’m so lame and cranky, and that this just plain wrong.

Maybe your kids are different. I just know that once my kids started riding on their own, in the street, with cars, our entire family biking game changed. Sure, kids can do short trips on bikes; to school, to the store, to the neighborhood library branch,  all still relatively easy on bikes in Seattle.  But leaving our 2-3 mile zone with two kids on their own bikes? Crossing town to Ballard? Riding to Capitol Hill? Riding 8 miles from Ravenna to Downtown Seattle? Not easy. Sure, we did it. A bunch of times. And it was not safe. Not fun. Joy was in short supply. This city has come along way in terms of bike friendliness, but, frankly, (and this may hurt some feelings at SDOT and Greenways), it’s still a big giant turd when it comes to being a safe place for kids to ride. Even for my kids, who are seasoned riders and have pedaled all the way to Mexico.

Yet. The key word is yet. 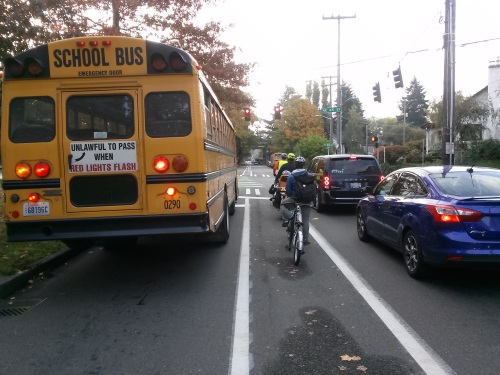 I think our family was just too early. Seattle wasn’t ready for family biking when we started in 2007. I’d venture to say Seattle is still not really ready for family biking. Again, I’m not talking about parents biking with kids as passengers, I’m talking about kids pedaling their own bikes. (editor: yeah, they can do it, but it’s totally sketch. I’m getting up there in years. My heart can’t take this shit).

Our city still isn’t set up for kids to pedal across town safely….yet. The key word is yet. But I’m hopeful. The bike infrastructure we have now, in 2015 Seattle, is piecemeal, at best. A two-block bike lane here. A one-block “protected” bike lane there (editor: ie: plastic pylons tattooed with black bumper kisses and skidmarks. That is, where they haven’t been ripped out of the ground under the wheels of angry vehicles). Some green paint. Maybe a bike signal, maybe not. Connections? No. Seamless connected cross town routes? Not there, yet. Driver awareness of bikes. No way. Drivers don’t know the rules, the laws, or what this new bike and ped signage even means.

If you have to travel outside a neighborhood zone on bikes with young kids, you’re pretty much screwed. Fine for an adult. Not fine for kids. Not fine for a family. At least, not fine for me and mine. You may make other choices and that’s OK. No judgement here.

I know work is being done. I know safety improvements are coming. But by the time Seattle has a connected bike infrastructure that is safe for all people (ages 8-80!) to travel in the city, my kids will be out of college. They might possibly be married. And they might have kids of their own. (editor: Can we fucking get on with this already? We started caring about this shit even before we had kids and now we’re talking about them having kids and wondering if the city will even be safe by then. Christ, I’m so sick of this shit).

Apparently, we’re (ie, the editor is) getting tired. So I think we’ll stop here for the night and take up the car issue in the next post….stay tuned, part two is just around the corner.

– Anne and Tim (the editor if you haven’t guessed)

This entry was posted in alternative transportation, bigger than here, bikes and tagged cars, family transportation. Bookmark the permalink.