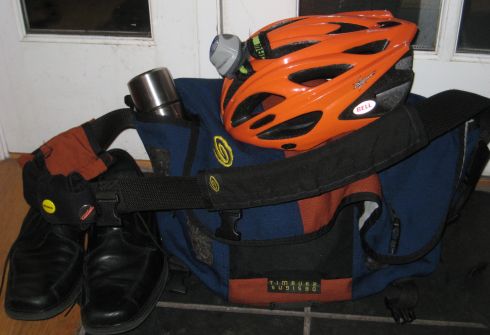 We often get asked why we ride and we occasionally ask others why they do or don’t. Other than the usual (“it’s great exercise!”or “the weather sucks”), our insight into the matter has been lean. One thing I sort of remember from grad school (way back in 2007) is that sample size and makeup play heavily into the data returned by these adhoc surveys. To get better results, we’d need to reach beyond our little-ol’ personal network.

Luckily for us, superstar local bike blogger Kent Peterson has done just that. He invited his rather large readership to answer the why questions, going so far as dedicating a separate post for each.As of this count he has pretty good numbers: 47 comments in the “Why don‘t you bike commute” post and 60 in “do.” That ratio, massively in reverse of what you’d see in normal society, obviously reflects that his readership is a butt-load of bike commuters.

Accordingly some of his doers cover major distances and their stories serve up a hefty dose of inspiration. Heck, even a large number of his don’ts are actually people who want to ride but have pretty good reasons for not bike commuting. A torn calf muscle is a good excuse in my book. So is a being a service technician who needs a van full of equipment and parts while covering an entire metro area.

Digging deeper, I found a few of iffy excuses that we might be able to do something about. For example, Bill says he’s worried about the security of his bike at Whole Foods. Heck, Bill, I can totally relate to that. I’ve blogged about crappy bike parking facilities at least three times. Whole Foods, of all companies should do a better job with their bike parking. You should contact them and share your concerns.

And at least commenter “Wreck” is honest:

“I like to sleep. With a hour commute each way that means waking up around an hour or two earlier.”

My favorite wisdom thus far comes from commenter “The Scarlet Manuka” refuting a roommate’s fear that punctured tires and thrown chains will make them late for work.

“[That’s] Not often my experience – it’s usually a combination of laziness and optimism that get me to work late.”

So true. Riding helps me to arrive at work fresh, ready, and often late. For me, the idea of bike commuting is a relaxing way to start my morning. I don’t feel the same pressure to get out of the door as I do when driving. I take my time. And I think I’m more productive during the day because of it.

So, once again what I really want to know is, how about you? Why do you or don’t you commute by bike?

Feel free to post here, but please add to Kent’s Do and Don’t datasets, too. That way we can all learn something.