Head’s up: Anne and I were out for ride with a neighbor on Wednesday and noticed an upcoming Burke-Gilman trail reroute.

An easy detour is available on Mason Rd, the lightly-traveled access road which runs parallel and just above the trail grade.

END_OF_DOCUMENT_TOKEN_TO_BE_REPLACED

New Light Rail and No Parking, What a Concept! 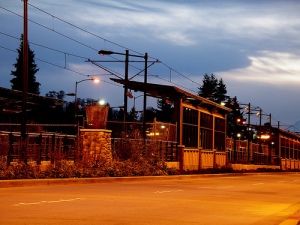 Today’s Seattle Times reports that some would-be light rail riders are upset by the lack of parking around the light rail stations. According to Rick Sheridan, SDOT spokesman, this was done on purpose.

Sounds like a great opportunity to promote cycling. One mile is a doable bike ride for most people. Let’s hope people get inspired to give cycling a try since they won’t have any place to park their cars. Go ahead,  buy a beater bike and ride it to the light rail station.

Does anyone know if they put in adequate bike parking?

I’d love to hear from some South end readers about what you think of this topic.  The Times has 329 comments at this time, so it looks like a hot one.