Why We Ride: Thoughts on Motivation

Let’s talk about motivation. What drives you to ride your bike or walk? Why on earth — especially during these sodden, cold winter days — do you commute via bike or feet over a warm, dry car?

A little housekeeping first: when used in the same sentence as bikes, commute has many definitions. Most people associate commute with work. But work isn’t the only destination for a commute. What about school? or play, activities, errands, appointments, or even to run kids here and there? Maddie, for example, is a bike commuter in our eyes. And for the purpose of this article, if you use a bike to “get around” (say, any use not strictly for sport),  then you are a bike commuter too. This article mostly refers to “bikes.” But if your needs are better met by mentally substituting “walk” or “scoot” or “multi-modal” instead of “bike” as you read this post, you have our blessing.

You’ve heard of first world problems, right? Most people who live in the world’s wealthiest nations have abundant choices. One of those is the option to choose our mode of transportation. To get from point A to B, we can drive or walk or take the bus or use a bike, a scooter or a unicycle, or even hire a town car. Us first-worlders are blessed (cursed?) with commute options.

So why choose bikes?

In our non-scientific sample of riders we know, when asked why people bike commute (or want to bike commute), many respond with one of the following:

Yes, those are great and valid and noble goals. But what’s the real reason? The driver. The motivator?

Why do long-term, regular bike commuters leave their cars (in the driveway, in the parking garage or on the dealers lot) and choose a bike instead? Keep pressing folks for reasons and things start getting interesting. 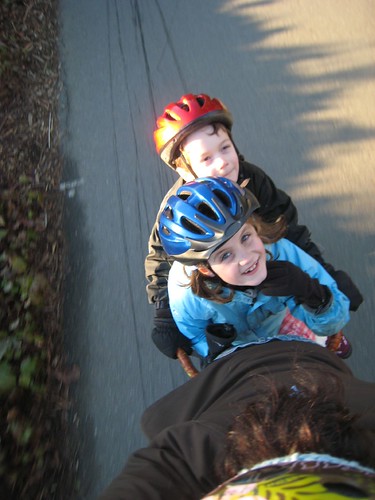 Tim talks a lot about bikes providing freedom. He thinks freedom encapsulates some of those “typical” ideas (freedom from the expense of a car, freedom from traffic, freedom of the tyranny of the gym, freedom that comes from the knowledge that you’re not contributing, as much, to environmental Armageddon). For others, bike riding contains a spiritual element. Maybe a connection with the planet. Zen. Self-reliance.

For me, it remains joy.

Last month I wrote about the joy of getting groceries by bike. For me, it’s not just about money, or fat, or saving the planet, or … . it’s about personal happiness and finding joy in everyday tasks.

Bob H agreed but he thought saving money was a big motivator:

I do take issue with the idea that saving money is not a great reason to ride. There is a great blog that shows that biking vs driving saves a family somewhere in the ballpark of $100,000 in 10 years. That sounds like a pretty damn good reason to ride to me.

Sure bikes save money. But I think people get hung up on this.

I’ve read cost-calculators on bike commuting web sites. But let’s face it, taking the bus is cheap too. And walking is even cheaper. People still drive. So will saving money drive you to hop on the bike each and every day through rain, fog, sleet and snow or heat and humidity in the summer?

Is money alone a good motivator?

Face it. Cars are cheap. At  fifty-five cents a mile, I can justify a quick trip to the store or to run my kid to school or a friend’s house, or to the gym or (insert destination). Until gas reaches $20 Per Gallon, most people will rationalize their car driving along with all of their other oil-driven consumption habits.

For many of us choice-laden first-worlders, I don’t think riding bikes (or not) is an economic decision at all.

In the United States, gas and cars and roads are subsidized. Which makes them relatively inexpensive for the value provided. Besides, we’re all comparatively rich. We can more than afford to drive cars on this infrastructure we’ve designed for the cheap automobile. Even as gas prices increase a tiny bit, we’re still more busy than ever. We all know time is money and because cars are faster than bikes, it’s actually cheaper to drive!

If bike vs drive is purely an economic decision, we’d be foolish to bike instead of drive.

I have read the calculators that multiply the bike vs. car savings over time. The internet is rich with stories of people gaining financial freedom by giving up stuff. From early-retirement “badass experts“, to  get rich slowly, to getting your life back, they talk about cutting back on “stuff” as a path to financial freedom. Some preach about “getting rich” by saving a little on day to day items, making your own coffee and lunch instead of buying lattes and meals at restaurants among other things. Riding bikes is one of the ways, each 55 cent trip adds up, right? The fact is, the  latte method of saving money won’t make you rich. Helaine Olen, author of “Pound Foolish” discusses this trend in her interview by the Economist. She says many of these American, self-proclaimed financial “gurus”, have limited expertise/training in the field of economics. Yet they make money giving financial advice!

From where I sit, saving money (or gas or losing weight) isn’t enough of a motivator for most people.

When mom or dad buckles their kid in the car to go to school, are they thinking about how much that trip will cost them? Do they weigh the amount of money they could save by leaving their car at home?

I loved this story about the monetization of  time and how it backfired on an Israeli daycare. I first read about this in Freakonomics in 2005 and again in Daniel Pink’s Drive. An Israeli daycare tried to charge parents for being late when picking their kids up from daycare. But the plan totally backfired. When the daycare put a price on being late, lateness actually increased!

Because busy parents realized the price of being late was a bargain. Instead of having to worry about how your tardiness might impact your relationship with your child’s teacher, or how it made you look pathetic in the eyes of the other parents, it became a strict transaction. Pay a tiny bit more and reap some pretty large benefits.

In the same vein, these stats on the average distance of most car trips in the US make my eyes glaze over. I’ve read them hundreds of times, I’m sure you have too:

No wonder citing stats doesn’t curb the average American’s driving habits. Paired with the knowledge of how cheap it is to drive, it’s finally sunk in. Driving makes financial sense for many people.

If I quantified every car trip and put a dollar amount on all of those less-than-a-mile-trips I make on a daily basis, I’d realize how cheap it really is to drive. You mean it’s only going to cost me fifty-five cents to drive my kid to school? And it’s raining? And we’re late? Totally worth it!

What if you put a happiness value on walking to school instead?

If I take ten minutes (or 20 minutes) to walk or bike with my kid to school, I have a chance to have some fun, and talk to my neighbors.

I might slow down, engage with my kid and discuss the intellect of crows or gather dead moles and plan their proper burial. I might ponder whether or not dogs can sense whether humans like them or not. Hmmm, can they? Or we might run into a friend and spend ten minutes before school walking and discussing Minecraft.

My kid will also accomplish something (riding up a hill, or walking up a hill), and feel pride in getting there on his/her own power. (Yes, even a ten minute walk feels like an accomplishment to a four-foot-tall person).

When you look at it this way, NOT walking or riding to school has a pretty stiff price. Self-esteem. Family time. Fitness. Community-building. Whoa. The cost of choosing driving just went way up beyond 55 cents/mile.

Or What about a Social Cost?

Let’s go back to that daycare example. Once those un-priced  social costs were out of the picture, being late became easy and cheap, and socially acceptable. (And also unsustainable for the daycare).

It turns out, the system we’re all familiar with (don’t be late because it’s not socially acceptable), as imperfect as it can be, works best in most cases.

A pure financial cost (or savings) isn’t always going to drive motivation in the intended direction.  Daniel Pink refers to this pure financial cost as carrots and sticks. External rewards (money) don’t work as long-term motivators. Even if they do work for a little while, they won’t last. As soon as the initial buzz of saving money has worn off, we’re back to our old habits.

What if we could add some of the unquantified, but very real social costs that keep daycare pickups on track, to the “do I drive or not” equation?

What if it was socially unacceptable to … [drive your kids 4 blocks to school], [fill the roads around our schools with dangerous cars and pollution], [not spend a few minutes walking and talking with your child]?

Sure, for some parents the ability to buy time may win. A difficult work schedule may mean the driving-dropoff — even with social costs factored in — is the cheapest solution. At least initially.

But what if more people start walking and riding? And it becomes more commonplace to see sidewalks packed with kids every morning? And we all do it enough that it becomes a habit?

Maybe the idea of sending your kids, on foot or bike, with other kids no longer seems as dangerous and socially irresponsible as it once did? That opens the possibility for the equation to shift and the parent to consider the value in other ways of getting to school.

The first step is making a choice

Bottom line, people make choices that make them feel good (or at least less bad). The problem is sometimes we don’t choose, we just do. Habits are formed and maintained every day.

Considering the ease and ubiquity of our car-oriented society, driving is often a habit. Which means people need a powerful motivator to help them to buck the system and ride (walk/bus/scoot, etc) instead of getting into that cheap, warm, dry car (with tunes! and coffee!) every day.

We regular riders (and wannabe riders) have made these choices and are driven by these motivators– we may just not be able to articulate them to ourselves yet. Maybe we started with one: saving money, or getting in shape. and shifted to something deeper; freedom, joy, spirituality. For the commute curious, the “winning” motivator may not be known yet.

For me, wanting joy and happiness and simplicity is the reason I ride and walk. For Tim it’s freedom.

Why do you ride? Is money your motivator? Or happiness? Or something else? I’d love to hear your thoughts in the comments.

This entry was posted in alternative transportation, bigger than here, bikes, Commute, Everyday Biking, sustainability and tagged biking, Commute, motivation, walking, why commute by bike?, why?. Bookmark the permalink.

37 responses to “Why We Ride: Thoughts on Motivation”