Reports from the Field: Another Local Xtracycle

Tim and I blather on and on about bikes and our adventures on the blog and we love to hear from people who find some of the info useful.

James W emailed us this morning and passed along photos of his Xtracycle, the Green Moose, he built up with his son. It’s a beautiful build. We’re glad you contacted us, James, and look forward to seeing you out on the road!
I included his mail in the post (below). Looks like a candidate for  inclusion in the Xtracycle Gallery, perhaps?
_________________________________________________________
Hello Tim & Anne,
You two don’t know me but my office is [on Dexter] and last summer I would see Tim’s red Xtracycle in the bike room.  A short while later I happened across Car Free Days and have enjoyed reading about your adventures.  I take from what I’ve read that Tim has since changed jobs and I haven’t seen the red Xtracycle for some time.
I had always been interested in the long-tail concept, mainly for kid hauling and going car free on weekends, so late this spring I took the plunge and re-built an old Trek MTB purchased through Craigslist.
Here are a few pictures: (i) as a partially stripped frame almost ready to go to the powdercoaters, (ii) on its inaugural ride, fully assembled but without the final stoker stem and saddle (iii) as it looks now, shot at our favorite park and (iv) parked outside my office this morning.
It was a fun project, and the second bike my now six year old and I built have together.  The first one is called the Grey Goose (photo also attached) and this one is called the Green Moose.  We did the harder parts of the assembly for both at Wright Brothers Cycle Works in Fremont.  The Green Moose will probably get a rear disc wheel and brake and some wood fenders by this fall, and maybe a basket but other than that its finished.
Anyhow, thanks for the inspiration, both in the Dexter bike room and on the blog.
Best regards,
James W 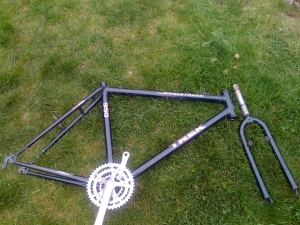 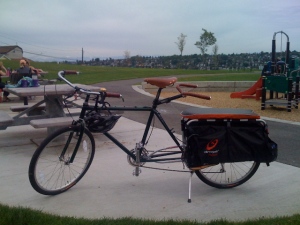 11 responses to “Reports from the Field: Another Local Xtracycle”