Update of the NAHBS Update 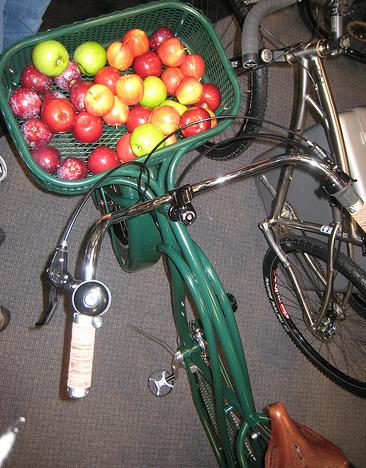 I’ve been agonizing over how I’m going to make a quick post out of this trip. Frankly I’m buried at work and tired and I’m just not going to do all these bikes justice tonight. Sorry about that. Let’s just say the show was a great experience. I love bikes. All bikes. And these were some amazing bikes. Can we call it good right there?

No, there’s always got to be more. Like, for example, you may have heard some whining backlash crap about how the event is elitist or that it doesn’t pencil out for the builders or that…. blah-blah-blah whatever. Though I’m prone to whining myself, I just don’t buy it in this case. I should just let that go and talk about the bikes, but no, I have to be attracted to conflict.

Here’s my take: all the builders I spoke with (=many) were happy to be there. For many of them, it doesn’t have to pencil out. The market is great and they have waiting lists. They don’t need the business, but I think they are happy to hang with some normal (you know, 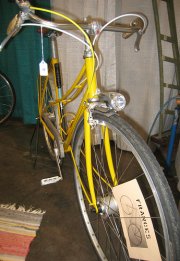 the ones who can’t afford their bikes but still love to ride) folks. Carl Strong stands out there. He talked to me and my buddy Kurt for about 15 minutes. The dude was great. He gave us a history lesson, did a steel metallurgy compare/contrast, passed along some props to our our bargain-price-but-beloved, and non-attending frame builder (Doug Curtiss/Curtlo), all while flipping through a freebie Road Bike Action magazine he bummed from Kurt. Great times.

And if the builders were happy to be on board, the bike geeks were about five notches above that. I met some totally stoked cyclists. None of them had plans for one of these frames (OK, I do know someone who was delivering a check to Ira Ryan), but they were more than happy to plunk down their $15 admission. Everybody was in a great mood. Think art buffs in the Louvre. Think baseball fans in Fenway. Think cycling fans at the Tdf… It was a good time and I, like most everyone I saw, was glad to be in beautiful, bike-friendly Portland. 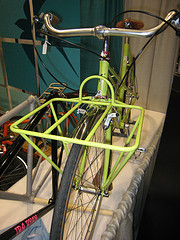 Here’s the agonizing part… I really don’t know what bikes I should bother highlighting. To me, the whole show was a highlight. Like I mentioned in the last “update,” the city/cargo trend is building. Lots of nice city bikes. Plenty of mixte frames. Long bikes, too. Alexis at Villin makes gorgeous rides and is a super nice guy (and I’m not just saying that because he gave me a t-shirt). What else… Andy Hampsten’s Giro-winning “Huffy“(made by John Slawta/Landshark) was cool, plus the Escargot, Rene Herse, Proletariat bikes (Burley ex-pats), A.N.T., Frances, Vanilla, Waterford, Portland bike piles (with a Vanilla!), the Lance and more…

Here’s my suggestion. Hop into the photostream and look around. If you have questions, I’ll do my best to answer them — either in Flickr comments or a blog post or whatever. As I continue cleaning up the photos and adding tags, I’ll make note of the bikes I keep coming back to. If any really catch my fancy I’ll try to highlight them this week.

Otherwise, it’s just you and the photos. As far as art goes, these aren’t anything special. But I did shoot a ton and I’m making up for it in quantity. So, dig in, check ’em out, and report back with questions/comments if you want.

One response to “Update of the NAHBS Update”