What sort of winter hibernation do you enjoy? The Car Free Days family tried to escape the cold and dark by hunkering down at home; reading, drinking gallons of hot tea, cuddling up around the fire, and occasionally getting out-of-town to ski in the Cascade range.

But a few winters ago we started doing something even better with the short, sucky days: dreaming about and planning epic summer bike tours.

With just over 8 hours of daylight during the winter months, Pacific Northwesterners (and Scandinavians, and Russians, and ….) must come up with some way to preserve our sanity day after dark sodden day from November through March. Residents of these northen climes rely on many different methods for coping with winter dreariness. Some use light therapy, others make regular pilgrimages to day spas; soaking in hot pools and sweating away sorrows in saunas. Still others escape altogether with vacations to warm sunny climates. For some reason the historic, go-to strategy of heavy drinking has fallen out of favor. At least in our circles.

A new twist on beating dreary days came from family biking media darling Emily Finch this past December. I spent a good part of my early Christmas vacation living vicariously through her highly entertaining winter indoor-painting-therapy-program:

So did it work, Emily? Did it help the dark days seem a little brighter? If so, I might have to give painting a try next year (side benefit. We have some 10+ year old painting jobs to “finish“!).

But for now, I think we’ll stick with what’s working for us: scheming and planning ways to spend the 93.64 days of summer touring as a family by bicycle.

We’ve been on four or so family bike tours and it only took the 2nd to get us hooked. We delight in the simplicity, being outside each and every day, unplugging and escaping all of the many screens that dominate our lives. It’s also refreshing to experience the journey as an essential part of the adventure. Tim and I used to take epic road trips but the journey was just something we endured to get there. And we always arrived with sore backs. That became even less fun when we tried to fit a family into that model.

With bike touring, the destination is still a goal, but pedaling, enjoying the views and accomplishing epic mini-feats (like climbing scary hills or surviving brutal headwinds) each day is adventure gravy. We trade sore backs for sore butts  (for the first couple days) but it’s totally worth it.

Bike touring is an individual, goal-oriented, team-based, self-powered transportation/human development factory. If you don’t pedal, it impacts the entire family. You can’t sit it out on your low-energy, low-desire days. You need to learn to motivate yourself to help keep the family on track. It means all of us (mostly willingly) participate in the day-to-day tasks required to make it all happen: working our legs to pedal up endless hills, building fires, cooking and setting up/taking down camp every day. Bike touring is an amazing way to learn about accomplishment!

Who were the first bike tourists?

Traveling by bicycle has been around since bikes were invented. Some of the first records of human-powered tours include 19th century Londoners riding hobby horses or push powered vehicles (similar to modern-day balance bikes). Imagine hobby horses racing and beating stagecoaches in 19th century London. In On Your Bicycle: an Illustrated History of Cycling, James McGurn traces (among other things) the origins of touring bicycles.  Other accounts during that same time period include stories of touring in 19th century France and England. Early American anecdotes about bike touring began with the League of American Wheelman, (now the League of American Bicyclists)  founded in Newport, Rhode Island in May of 1880.

I wonder how bicycle tourists researched routes, lodging, and tourist traps before they set out on their adventures in the 1880s?

Planning a Bike Tour Pre and Post Internet:
Trip planning is fun and easy, but that’s a very recent change.  Something major happened in the last couple decades to transform an often a difficult quest for information into information overload.

Hmm… I wonder what that was?

You guessed it. The Internet. More specifically  household internet access has grown exponentially since the mid to late 1990s, making it easy for one bike traveler to share information with many. It’s hard to believe our predominant source of information only reached mass adoption in the past 15 years, but we won’t argue with the bonanza of shared knowledge! Twenty-first century trip-planners are nearly-spoiled by the wealth of information instantly available on the internet at any time of day.

The not-so distant pre-internet days were a different story. 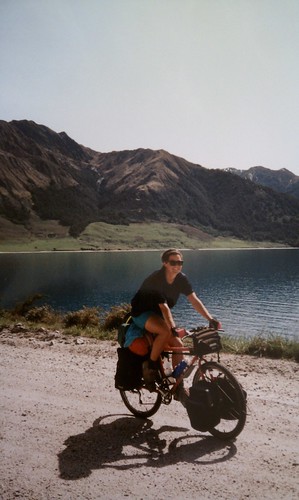 When I planned and completed my first significant bike tour, a six-week ramble around the South Island of New Zealand in 1991, I used library books, maps, and a  Hostelling international membership. Truth be told, very minimal planning went into that trip. Hey, I was young, who needs a plan? Winging it seemed much more fun (and was a lot easier in those less-infowealthy days)! Before my plane landed in Auckland, I had hardly done more than assemble way too much touring gear (4 panniers, large bags strapped to my rack, and a handlebar bag. What the heck is in all of those bags?), talked to people who had done the same route, skimmed a guide-book or two and bought a map. That was it. Everything else was learned along the way.

I’d argue in many ways my prep for that trip, just 20ish years ago, had more in common with the pre-trip planning of  those 1880s cyclists than it does with our current flickr, twitter, and blog-enabled days.

I’m not sure which is better, outlining every detail or winging it. Probably something in between. When more of the trip is left to chance, expectations are lower and experience guides the journey instead of an itinerary.

And if we didn’t plan, how would we beat the winter blues? I’m afraid neither of us likes painting that much.

We plan to finish the Southern California leg of the Pacific Coast route this summer. Details are fuzzy but the rough plan involves riding the section we missed last summer (Seattle to Portland), somehow getting to SFO with the giant tandems (likely renting a car because Amtrak sucks for tandems), spend a few days in San Francisco area (we rushed out last time and the kids let us know that’s not an option in 2013), then get on the tandems and pedal & camp our way from there to Mexican border. Frankly the whole idea of getting the combined mess of bodies, gear, and two 9-foot long bicycles back to Seattle in some reasonable amount of time and budget is the most daunting part of the trip planning so far, but it’ll work out.

We’ll keep you posted as plans firm up and also share some internet-enabled trip planning resources in a future post.

What about you? Have any summer bike planning tips? Is anyone planning an adventure of their own in 2013? If so, we’d love to hear about it!