What would get some approaching-middle age parents to stay up all night riding bikes all over town looking for star fruit and covers of the out-of-print Seattle PI and wrapped toothpicks and Polaroid photos? Why the Solstice 9 to 5 all-night Bicycle Scavenger Hunt, of course.

It all started a few months ago when Tim asked me if I wanted to do the 9-5. My reply was immediate and fierce. ” I’m not staying up all night riding my bike all over town.” I go to bed at 11 and can usually never make it through a movie without falling asleep.

and then he called me boring. and he may have said I was old.

The 9-5 is a bike scavenger hunt organized by Ryan of Go Means Go. The annual event (this was the 2nd) takes place the Saturday of the summer solstice. It starts at sunset and ends at sunrise. 8 hours on the bike, pedaling all over town picking up random things.

Once I decided to do it, I was totally on board (and looking for four others to round out our six-man team). We asked all the bike riding folk we could think of. The standard reply was, “that sounds like fun, but (insert excuse here)”. We told our always energetic brother-in-law, Dan, about it and he was in. He asked a few friends and they had the same response as ours, no way. Julian was into it but non-committal. Even up until the day of the event, we weren’t sure if Julian would round out our four (not six) man team. When he arrived at Gasworks at 8:59 raring to go, we knew we were set. Four gatherers are better than three and Julian has enough energy for all of us put together. Plus we were all on a mission and drinking coffee not beer like some of our competition.

What followed was 8 hours of pure fun.

I can’t remember how many things were on our manifest, but it had to be @ 150, each with a point value depending on how common or obscure it was. There were also time sensitive stops, pictures of clocks at 1:30 AM, and a couple of meet ups throughout the night for coffee and pastries.

I haven’t laughed that much for consecutive hours in years. 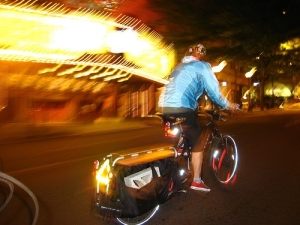 Tim and I often ride at night: to see movies, go to dinner, meet friends etc. you know, the kind of things old boring married people do. But I’ve never taken a tour of the entire city after sunset. and I mean the entire city. We were everywhere: Fremont, Ballard, Wallingford, Ravenna, Laurelhurst, Eastlake, Capitol Hill, Downtown, SoDo, East Marginal Way, the Waterfront and sometimes looping around to those places a few times throughout the night. There’s nothing like riding through Fremont at 4:55 AM in the middle of the road as the sun’s rising with nary a car on the road.

Other than the brief period when we all hit a wall in downtown Seattle @ 2:00 AM, it wasn’t that hard to stay up all night. Being with friends and laughing and having a common goal and checking stuff off our list really helped to keep us awake.

And the best part, our team took the trophy! 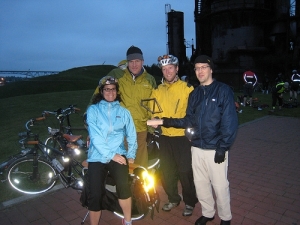 It helped to have 2 Xtracycles on the team. And did I mention Julian has lots of energy? That helped too. He wouldn’t stop until he found the elusive star fruit. And he was all over getting a photo taken in the Re-bar photo booth (while shirtless and in bike helmets no less). Shirtless earned extra points. The trannys didn’t even notice them and no one blinked an eye.

We got most things on the list and tallied the most points. The canned food, no limit, on the manifest was a loophole that we chose to use to our advantage. 96 cans of tuna (to be donated to a food bank), worth 2 points each easily slipped into Tim’s Big Dummy bags and tipped us into the winners circle.   That cinder block I picked up on Capitol Hill at midnight and hauled around until 5:00 AM was no problem at all. And Julian’s nimble Brompton made it easy for him to pop into a store (or 5) looking for his prize star fruit. And Dan on his fast city bike got us the Starbucks clock photo at 1:30 with mere seconds to spare.

The post ride high lasted so long, I didn’t even know I was tired. And then the high wore off and I was tired…real tired. It’s one thing to stay up all night when you’re young and stupid. But doing it when you’re old is just hard.

Despite (still) being tired, Tim and I are already making plans for next year. He wants this to be our annual pre-Father’s day tradition. Want to join us?

Thanks, Ryan, for the great event.