Ghost Bike: A ghost bike, ghostcycle or WhiteCycle is a bicycle set up as a roadside memorial in a place where a cyclist has been killed or severely injured (usually by a motor vehicle).[1][2] Apart from being a memorial, it is usually intended as a reminder to passing motorists to share the road. Ghost bikes are usually junk bicycles painted white, sometimes with a placard attached, and locked to a suitable object close to the scene of the accident.

For the past few years REI (Recreational Equipment, Inc) has been on a mad tear to show they are a legit player in the urban biking business. They’ve made some good city bikes, some functional and affordable bags, rain gear and so on. They teach classes on urban riding and give money to the right bike organizations.

They look to be as they claim — legit urban riders.

So imagine my shock to see the headline in Bicycle Retailer (hat tip to Byron at BikeHugger on Facebook this morning) proclaiming:

REI to be exclusive retailer for Ghost bikes in US

“GHOST BIKE?!?” I exclaimed. Seriously? Could they not realize what a mistake this?

Though it’s been a while since I’ve been employed in the industry, I still follow it. I’ve been aware of Ghost Bikes (a German brand.) And even remember thinking “cool, but that would never fly here” — for obvious reasons.  You see (and this is for any REI Bike Merchandising Managers or Marketing folks reading along who may have skipped the definition at the top of the post):  In the United States (at least), a Ghost Bike is a memorial placed at the scene of a rider serious injury or death (usually from a vehicle collision). It’s a terribly sad symbol. It means a person has likely died!

But that’s not what we hear from REI. Instead,

“Partnering with Ghost brand bicycles allows us to offer a premium, high-performance, award-winning bicycle brand with full distribution across the United States,” said Mike Cannon, REI merchandising manager for bike. “We are impressed with the level of detail, smart design and engineering Ghost brand bicycles bring to the industry. The line will also help round out our bike assortment so REI can better support all levels of cycling.” —Bicycle Retailer

I don’t condemn the Ghost Bikes brand for their name — again, they are a German company and,  aside from the obvious language reasons, the whole bike-car-death relationship is entirely different (ie, when a car hits a rider in Europe, the driver is usually punished, therefore, no need for a Ghost Bike). However, I do, strongly, condemn REI for choosing to enter into (and trumpet!) their exclusive relationship with a brand carrying such a disrespectful name.

REI likes to brag that their new big-money CEO/President,  Jerry Stritzke, came from a specialty brands background: Coach, Lululemon, Victoria Secret and more. So here’s a question, Jerry: At Lululemon, would you have allowed a men’s fitness brand called “My father’s Cardiac Arrest“? Or launched a line of “Mugger killed Mother” purses at Coach?

No, because that would be disrespectful to anyone who lost a loved one to a heart attack or street violence. Not to mention that you wouldn’t want to saddle your brand with a poor-taste marketing stunt.

So I ask again: how can a company that endlessly touts their urban riding/bike commuting chops not know the negative connotations of a Ghost Bike? Especially since less than a month ago, a local rider (and more importantly a wife and mother), Sher Kung was killed when she was run over by a truck as she rode down one of Seattle’s  urban riding/bike commuting lanes. Much public outcry followed. A Ghost Bike was prominently placed as the centerpeice of her on-site memorial and featured in much local media about the tragedy, as well as serving as the starting location of her memorial ride.

Is it possible REI  staffers — again, a local Seattle company that claims they are fully vested in urban riding — have never actually ridden in Seattle. That they’ve never seen a Ghost Bike on local corners or heard tell of one? Impossible. My children have been aware of Ghost Bikes since at least 2008! 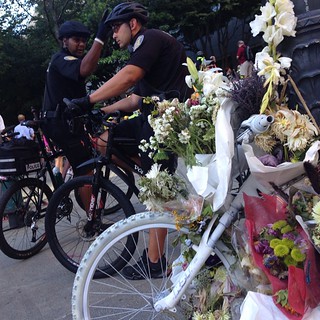 Is it possible no one from REI attended the memorial or even noticed the tragedy on local media? They give money to organizations that lead the memorial event. They have a dedicated public outreach team. Surely REI knew.

Is it possible that no one from REI never tried to “Google” their new exclusive partner? Possible they never noticed that the first entry is Ghostbikes.org (excerpt: “Ghost Bikes are small and somber memorials for bicyclists who are killed or hit on the street….”).

Is it possible that they never noticed the second entry is the Ghostbikes.org page dedicated to Ghost Bikes in Seattle, WA? Or that the 3rd Google Result is the Wikipedia page/definition I quote at the beginning of this post.

In fact you have to go down to result # 4, to find Ghost-bikes.com. Even if REI’s bike and marketing people were completely unaware of the Ghost Bike symbolism, how is it possible that they didn’t bother to check the Google for damning information. I’d think that would be dotcom branding 101 for $2B company.

Obviously I don’t know how this really went down. But I do know there were other options, such as about a zillion other bike brands out there REI could have gone all exclusive with. Or they could have negotiated to use Ghost-made Bikes, but rebrand them for the US.

Ghost, by the way, is a sub-brand of one of the world’s larger bike-holding companies, Accell. In case you’re a small-business supporter (as I hope you are) , you don’t have to worry that an about-face from REI will damage an up-and-coming brand. According to Bicycle Retailer, Accell also owns Raleigh, Diamondback, Torker, Currie, Redline and SBS (Seattle Bike Supply) in the U.S. and has brought in European brands Haibike and Lapierre to the U.S. Accell AG, with an almost half-billion dollar market cap, doesn’t need your or REI’s cash!

And because Accell brands and REI have a long history — I find it highly likely that Accell would have been receptive to feedback about how their brand would play with REI customers. Or again, even if they told REI to piss off, there’s still those zillion other brands REI could have got busy with.

At this point though, none of my speculation should matter. Surely the company just dropped the ball and didn’t actually plan to hurt the families memorialized by these Ghost Bikes.

But now that REI has been informed of this grave (no pun intended) error, the company should quickly act to repair their relationship with urban riders, and find some way to demonstrate respect (contrition?) to the many people out there — customers or not — who have been impacted by the death of a bike rider.

Immediately ending the relationship between REI and Ghost Bikes is the required first step.

disclosure. I’m a former (10+ year) REI employee from way back in the day. Anne and I met in footwear stockroom in the summer of 1991. We didn’t know it then, but it was love at first stock. I have so many great memories about “the co-op” but frankly, their direction over the past 15 or so years has been highly disappointing. Profits and growth above all — which I could understand if they were a publically traded company. But REI is not. It’s a co-op. There is zero pressure from the core membership to abandon their original values.

This entry was posted in bigger than here, bikes and tagged advocacy, alternative transportation, ghost bike, REI. Bookmark the permalink.