Day 1: Starting off on the wrong foot, but at least starting 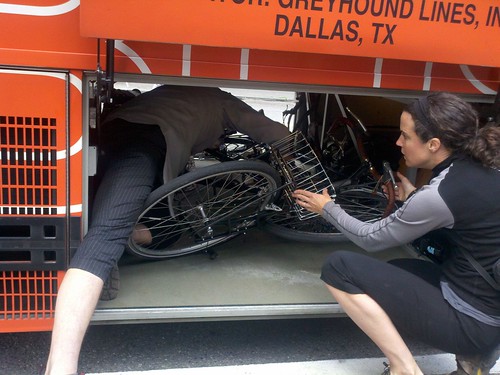 If you’re bored with trip stories, you’ll just have to sit tight and wait a little longer for our excitement to pass. Because here at carfreedays HQ we’re not done talking about our Pacific Coast Bike tour.

Bike touring is one of those life changing experiences: you’re not quite the same after returning from an extended tour. But it takes a few weeks and months for those lessons to reveal themselves. Even though we’ve been home for 51 days, we’re definitely still processing the experience. And finding meaning and life lessons in the most mundane parts of the tour.

Last year I waited 5 months before I was able to write about our 10 day San Juan tour. The delay wasn’t just about procrastination, it simply took that long for the experience to sink in.

I’ve found it’s tricky to sum up such an amazing experience in a few quick soundbites. And I’m often at a loss for words when asked, “How was your trip?”

When answering that question, I usually have to gauge the person’s interest level before I begin. Are they just making polite conversation? Or do they really want to know all about it? Some people want to hear about the whole darn thing. And some people just want a few soundbites: it was good, the kids loved it, my favorite part was (fill in the blank). 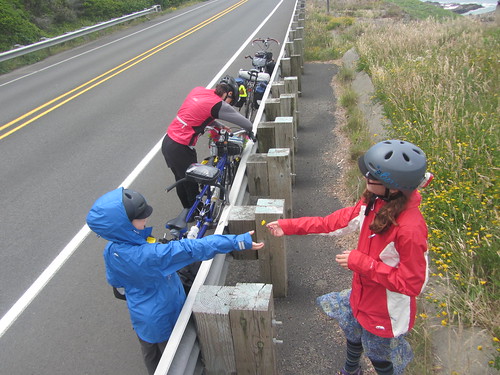 I’d say the most popular question we’ve answered is about the route: which way did you go? Did you really ride on 101? Quickly followed by, “I’ve driven on 101 and I can’t imagine doing it on bikes. And especially not on bikes with kids.” I assume a few looming unsaid questions are, what kind of parent are you? don’t you love your family? Are you crazy?

We like to say we’re adventuresome, not crazy. And yes, it was scary at times. But so is driving. How many times have you had scary near-misses in a car? And most people don’t think twice about driving them with their children every single day.

Along with the route, I usually start my trip recap with the story of our first day on the road. Envisioning those first few hours of the trip still causes me to bust out laughing. I honestly enjoy recounting that part the most.

Day 1, a crash and attempting to take public transportation to Portland with 2 giant bikes:

Up until a couple of days before departure, we had planned to start the ride directly from our house in Seattle and pedal all the way to San Francisco. We really really wanted to leave from our house and embrace from day one the very essence of bike touring: simplicity. We wanted to avoid hassles with public transportation and loading giant bikes on vehicles not built to transport them.

But as we learned time and time again on this adventure, plans don’t always work out.

A series of unexpected events (rainstorms, mechanical issues with the bikes and timing) prevented us from leaving on time and having two extra days to ride directly from our house in North Seattle to Portland. Since we ran out of time and had plans to meet friends in Portland for the Fourth of July, we ended up taking the Bolt bus to Portland and starting the tour there.

The first day is a funny story all by itself and pretty much sums up the can-do attitude that kept us going throughout the entire 22 day journey.

Within the first two hours we experienced more setbacks than we’ve ever experienced at the start of a trip: A crash, lots of mud, a bent chain ring, denied by Amtrak, accepted by Bolt, loading tandems on Bolt, no seat on the bus for Anne. Whew, that makes me tired just thinking about it. I want to go take a nap.

You crashed 1/2 mile from your house? Anne was covered in sewer mud? The  tandem timing chain front chain ring got bent and Tim straightened it with his Leatherman on the side of the trail? You were rejected by Amtrak? (I’m seriously done with Amtrak after that experience but that is a whole nother story) And accepted by Bolt Bus? And the driver unloaded all of the bags he had just packed and repacked the entire baggage compartment so he could fit your 2 giant tandems on the bus? Then, in his confusion and profuse sweating he oversold the bus and there were only 3 seats left to fit the 4 of you? 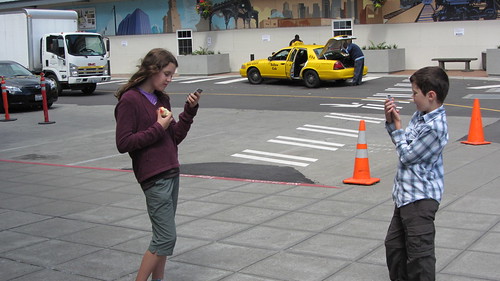 The first few hours would have caused weaker less-determined folks to pack up and head home, claiming that day one was not meant to be and to try again the following day. But we persisted and came up with a few new plans along the way. And we eventually found humor in most of it.

Black, Burke-Gilman-trail sewer-mud is seriously gross. And I wound up covered in it: immersed in black mud up to my elbows, squished between my toes and in my eyes. Ewww. But just 30 minutes after the crash, I had washed most of it off with all of the available water from our bottles, and was laughing about the entire experience. We didn’t go home even though we were a 1/2 mile from our house and Tim insisted we return so I could take a shower and he could fix the bike with proper tools.

The kids learned a thing or two about perseverance. Things don’t go your way? Don’t give up. Keep trying.

They also learned the importance of flexibility when traveling (and with life in general). Sometimes life doesn’t go as planned and you just have to roll with the punches and move on. Sometimes, you just have to suck it up and deal. Yes, we really do tell our kids to suck it up. (this is probably not difficult for Julian to believe, he likes to joke that I’m a mean mom after overhearing our son say so himself.)

They also learned a thing or two about the importance of laughing. Maintaining a sense of humor is essential for survival. And finding humor in otherwise non-humorous situations is quite important. We laugh a lot in our family.

Day 1 was quite possibly the most difficult day of the journey. We survived it without yelling at each other too much and once it was over we knew we were going to make it all the way to San Francisco.

What else could possibly go wrong that we couldn’t handle?

Because long-term travel is definitely a marathon, not a sprint and success is determined by how well you can handle unexpected hiccups and changes in plans. 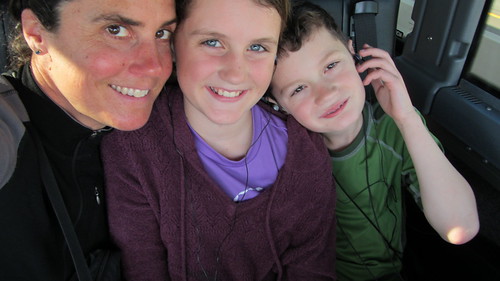 Now I really wish we had a picture of me covered in sewer mud on the side of the trail a 1/2 a mile from our house. Tim wanted to take a photo but I wouldn’t let him. At the time I was definitely not in the mood for photos and Tim didn’t dare press the point.

Next up: Portland to Beverly Beach

11 responses to “Day 1: Starting off on the wrong foot, but at least starting”