Leaf-Blower Elegance in a Bike-friendly Package 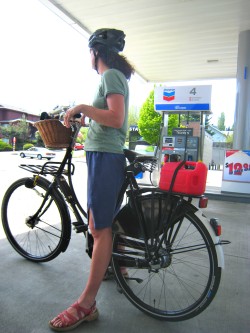 As most of you know by now, the team at Car Free Days is involved in an outright crusade to drive less and ride more. So far it’s been great. We’ve been riding (our Xtracycles and Anne’s Oma, mostly) nearly everywhere we need to go.

Those of you adept at reading through the lines, however, have probably noticed a little discord along the way. There was our son’s brush with hypothermia on the New Years cargo bike ride. There were challenging logistics for a 10pm wedding reception in Auburn. And we still get grief for the 50″ Plasma we scratched the crap out of hauling it home from Costco on the Xtracycles. And yes, the hills. Always the damn hills.

In many cases, my friends, pure people power isn’t the only answer.

We’ve dabbled with the idea of powering our Xtracycles with a Stokemonkey. Everyone we know who’s used one loves it. And Todd at Clever Cycles is a total peach. Really, the Stokemonkey is a perfect product, save one major shortcoming: They run on electricity. Franky, we just can’t condone the wasteful use of electrons wondering if perhaps a salmon got trapped behind a dam or a seagull met its demise at the blade of a wind turbine.

Though people can overlook such negatives, we at Car Free Days like to think our moral junk is of a stiffer quality than average. So that’s meant schellping our damn kids up the damn hills on our damn bikes with only our damn legs to thank.

Recently Car Free Days made the discovery of a miraculous device that allows us to pedal along in a continuing a cloud of self-righteousness, while also adding a cloud of another sort.

Pretty impressive, eh? Todd wants, what, at least a couple hundred bucks for one of those Stokemonkees and you still need to come up with all that dangerous electricity on your own. Check out the bottom line and you’ll see these leaf-blower retrofits are much more befitting of these tough economic times: $139.99 (plus shipping and handling) for the entire 80cc kit. And for you real bargain shoppers and/orHuffy riders there’s a 50cc kit that will save you another $10. 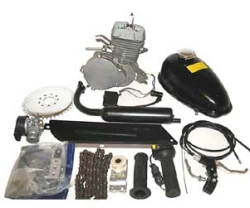 Some of you will probably say that this solution, too, has some negatives . Yes, it’s gas powered. But it only uses a little bit. Like a 20 oz Mountain Dew bottle worth (which also doubles as a handy “reserve tank”) every week or so. That’s practically nothing. In fact, in keeping with the spirit of the way processed foods are allowed to say they contain no trans fats when they really do, I’m just going to say this uses no gas at all.

And some of you will probably jump on board that “pollution” bandwagon, too. Yes, it’s true a little blue haze might follow you on your errands. But just keep a bottle of Fabreeze Febreze® handy or rub some dryer sheets through your hair (after removing your helmet, of course), and no one will realize the smell is coming from you.

And besides, it’s EPA certified—or at least the exhaust pipe is. Would the EPA really allow us to put something dangerous for the environment on our bicycles? I think not.

Now enough of this justification nonsense. Instead of bickering, let’s together enjoy one more idyllic video. I think you’ll agree the clean, quiet future of the Car Free Days family is going to be pretty special.

You probably realize the Car Free Days family has a bit of an activist streak. Since we started this blog we’ve been pushing for better bike racks, signage, and helped grow participataton in youth cycling. So don’t think we’re going to stop advocating for two-wheels now. We’re just going to be doing it a little faster, if you know what we mean. 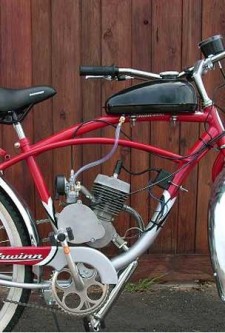 Imagine if half the kids at the local elementary school were able to retrofit their bikes for more efficiency and speed. Just think of how that would jazz up the traditional Cascade Bicycle Club youth bike rodeo! Right now, the only obstacle is cost.

Sure, $140 seems like a bargain for two-wheel nearly pedal-less freedom, but not if you are in second grade. That’s a lot of cash for an 8 year old. Suppose, though, we could get Wal*mart or Sam’s Club on board? I’d bet their superior supply chain and offshore manufacturing could drive costs down to the point that no one would have to pedal ever again.

Of course, innovation requires flexibility. For example if the price of Fabreeze Febreze® spikes or it turns out the Xtracycle frame isn’t up to the power of a tuned exhaust, we might just have to revist last year’s Escalade idea.

14 responses to “Leaf-Blower Elegance in a Bike-friendly Package”